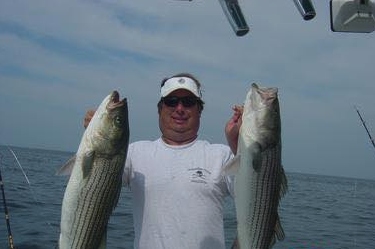 We had a great shark season last year. If you have never done battle with a big fish before, shark fishing is a great way to get the feel for fighting in stand up gear. Last year, we had many anglers, old and young, catch their first shark. The amount of porbeagle sharks we saw was amazing. These sharks showed up very early in the season, and were a common sight on almost every spring trip. The porbeagle shark looks like a mako but does not act like one – much slower and not as acrobatic, but good table fare. We have good dates still open for shark fishing, and we have the chance at mako, thrasher, porbeagle, and of course, the blue shark, who is most common. On a good shark trip, we can catch anywhere from 5 – 15 sharks.

We start the day ground fishing, so the group has some nice fresh fillets to take home, and also some fresh meat and some sent for the sharks. Then, we set up a slick, put out the big rods, and hang on. Sportfishing charter trips have been a passion for Bay Runner Charters since the beginning. We know where all the best spots are for catching cod, haddock, pollock, tuna, shark, and more. All our past clients rave about their fishing trips with us and always look forward to joining us again.

​Massachusetts cod fishing is OUTRAGEOUS in April, May, June, July, August & September. Book now to secure your date and fill your coolers!

Bay Runner Charters will be running Bluefin Tuna Trips to the Regal Sword as well as Canyon Trips.

Also, Bay Runner Charters will be running Striped & Sea Bass Trips out of Hyannis as well!